Staff member
Moderator
Member
I'm going to a different pharmacy to get another test.
Basically it was explained to me that you can be False Positive or False Negative and that the PCR test has a trust ability of 75% but you could also be:

False Positive => You test positive but have no symptoms and it will pass.

False Negative => You test negative, but have symptoms which could contain covid and should self isolate.

I don't have any symptoms, bar a small headache this morning that passed quickly.
OP

Staff member
Administrator
Member
Hopefully everything will be ok Thus, it cannot be easy to deal with such news. Have you gone to your local GP as of yet?
T

DS86DS said:
Hopefully everything will be ok Thus, it cannot be easy to deal with such news. Have you gone to your local GP as of yet?
Click to expand...

No I'm not going to until I get the result of a second test. If that's positive, I'll go. If it's negative...might do best of 3.

Currently watching the film Barry Lyndon with the bottle of champers I bought for the party I was supposed to attend.
OP

Staff member
Administrator
Member
Love that film, one of Kubrick's most underrated films by far. Coronavirus Ireland: Covid-19 is Ã¢rampantÃ¢ in the community and Ã¢out of controlÃ¢, warn health chiefs as testing system buckles under pressure

The coronavirus is now “rampant” in the community, according to HSE CEO Paul Reid.

Speaking on Morning Ireland on RTÉ Radio 1, Paul Reid said, “The virus is absolutely rampant now in the community. Everybody is at extreme risk of contracting the virus.

“Our health service is on what we would call now a high alert.”

He said that the health system is built for managing viruses, but not a pandemic, and just “can’t cope” with the number of tests being conducted each day.
Click to expand...

on the bright side, Thus will not need to take pfizer's dodgy experimental mRna vaccine! He will get natural immunity

But one has to ask, what was the stupid prick doing flying around during a fucking pandemic??

Verooka said:
on the bright side, Thus will not need to take pfizer's dodgy experimental mRna vaccine! He will get natural immunity

But one has to ask, what was the stupid prick doing flying around during a fucking pandemic??

Listen Mutt. Thus does what he wants, when he wants.
You stay at home like a good little girl and keep getting angry with yourself. 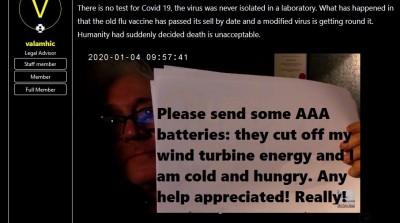 Staff member
Moderator
Member
Well I've tested twice negative after my first test which was positive.
The thing is my positive test result was recorded in the official statistics on the 31st Dec.
OP

Staff member
Administrator
Member
Are you feeling any better these days?
T

DS86DS said:
Are you feeling any better these days?
Click to expand...

Honestly there was nothing wrong with me. I did the test because I was in Ireland was intending on spending NYE with friends, they kind of suggested I get the test....
OP

in case anyone was wondering whether they had anything to hide.
R

in case anyone was wondering whether they had anything to hide.
Click to expand...

A dystopian hypothesis. With a view to the fact that human beings under the influence of ideologies like communism have done equivalent in almost every communist state that has existed in history.
I believe we are witnessing in the twenty first century the fact that our innate weakness is our wonderful democracy and freedoms. In this we have already observed actors such as Russia and Iran deploy our own democracy as a weapon against ourselves in their State propaganda.
But would the Chinese ever take it further? We have seen now how China can control Covid 19 through authoritarian measures. They weld people into their houses, they instantly isolate people who fail a temperature scan in purpose built quarantine facilities, and so on.
Whereas witness the debacle, the mutterings, the indiscipline, the failure of our own last lock-down. (Keep in mind a lot of that failure was also stoked by the "Covid-sceptic" internet propaganda).
So if the Chinese top party officials took seriously the doctrine of power, that they were destined to rule the world and must achieve it rather than be ruled by other forces, other ideology, would they do it?
Taking a brief snapshot, currently Ireland has 46 deaths per 100k, while China has 0.34 deaths per 100,000 people.
Would they justify themselvces say with the thought that a traditionally fought war for dominance would have a far greater casualty rate. And at the end of it, the conquered people would be forced to realise that authoritarian measures were superior to the democratic ones?
I listen to some ideologues on these forums, and I can witness how their ideology more often than not destroys their innate humanity and reason. I might add that I believe love is the only bulwark against the threat of ideology infecting people. It's not easy to love some, though.
Just some conjecture ex tempore.
You must log in or register to reply here.
Share:
Facebook Twitter Reddit Pinterest Tumblr WhatsApp Email Share Link
Menu
Log in
Register
Install the app
Top Bottom