Coal Gas and peat said:
He's going to be on some grimey street corner wearing suspenders selling himself soon

You must be his pimp so!

Coal Gas and peat said:
He's going to be on some grimey street corner wearing suspenders selling himself soon

must have sold a silver yesterday

Coal Gas and peat said:
The young Dan has got the site back up but only two visible threads

must have sold a silver yesterday 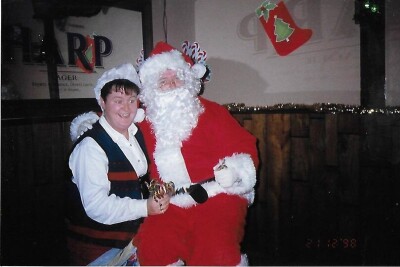 Member
Too fucking dumb for words, our Deco.

So he has a pal named Karen? Awesome. Totally fucking awesome.

Also, what kind of thicko calls the bar he works in after a virus? SARSfield's? It's no fucking wonder I can't stop laughing at the pathetic little cunt. Arsefield's, The Vinegar Bar, free salt with your chips. Watching him try and fail with his new site is fucking hilarious. Never seen a fat man grovel so sadly. Deco-no-mates - he ought to hire Jambo and give that cunt a meaning in life.

Says Deco: 'She would be the perfect sister for any person in the sense that if you needed ANYTHING, maybe a bit of advice or whatever, she was available and approachable...'

His mate, LOB? Deco seems to enjoy the company of alcoholics - an indicator of his own lush habits no doubt. His 'person of the day' affair reads like the obituaries in the Evening Herald: barely literate, overly emotional, and the kind of thing that makes me want to vomit all over the fat bastard. LOB? Perfectly named for that forehead - I bet a head-butt from him would leave Deco on the floor with his knickers loaded down with shit. Stupid fucking bastard. 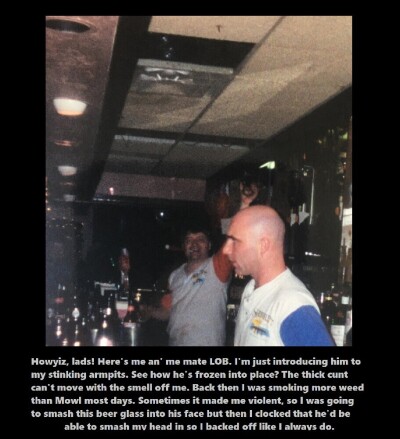 Then there's this cunt; he says to Deco: "For fuck sake, don't be a cheap bollox all your life and spend some money to get in some decent music for a change". This was not said in a mean way but those three words, spend some money, did hurt a bit, I will admit.'

So just like I told you - Deco's a tight fucking cunt. Wouldn't spend a penny to use a bathroom, would rather shit in a box and dump it in the bin. This is also the reason there were no doors on the toilets, Deco's too mean to buy the oil for a hinge. I don't know why Marianne puts up with him. He drinks to much, smokes too much, eats way too much and acts like he's a fucking rock-star. I remember him telling me how he booked bands all the time - except now we know he didn't. He never stops lying, the fat fool.

Oh, and as for the 'bands' he hires? Look a this cunt? A grown man playing a set of Pearl 'Target' drums: the lowest of the low, the cheap version you might buy for your nephew to see if he has any talent and the discipline to learn the ropes. He doesn't even have a crash cymbal. How fucking cheap is that? I've had junior players asking me which set to buy - a brand new set of 'Target' by Pearl for around three hundred and fifty plus hardware, or to go second hand and buy quality used gear. I was always advise the latter.

Only a complete fucking dufus wastes their money on shiny shit that really does sound like shit.

o there you have it - like I always said: Deco's a bum, a loser, he hangs with losers and hires losers.

He the Loser King of Dedham.

Check out this half-pipe here on his kiddie drums!! And then look at the singer's crotch? He pissed himself!! 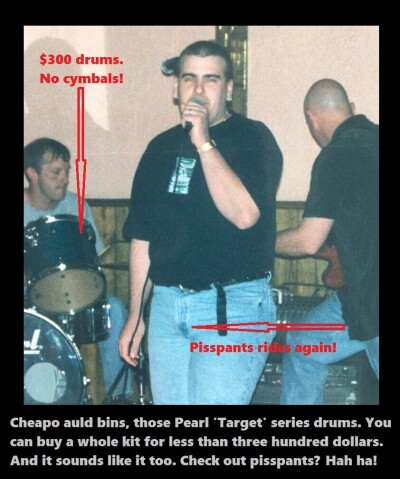 Says Deco: 'I used to hire bands all the time' - except no, he didn't. He let a few lads drag their gear in and play karaoke for pints and slices of coddle flavoured pizza. I had kids asking about the 'Target' series back fifteen and twenty years ago. I told to never waste their money on blingy shit. It might look passable to a punter, but to another musician? You's be laughed out of the room.

So what have we learned here?

Truth is, I can smell the bleach and piss in his bar just by the photos alone.

What kind of sad bastard reveals all this embarrassing shit months after being wiped off the intertits by Mowl? Is he trying to make recompense? Is he apologizing for being a lying little twat? Is he trying to expunge his reality in the hope that people will be fooled into thinking he has a glamorous life just because he posted a few grainy and blurry photos of photos from the last century?

Please: stop it, Deco - you're fucking killing me.

My nomination for person of the day would be better off called 'Dick-head Of The Day' and the award goes too... ..goes too.. ..

Declan Kelly! Lying cunt, fat bastard, terminal loser, toilet scrubber, chain-smoking twat pulling pints full of cigarette ash, moron extraordinaire, king of the karaoke, limp-dicked in the bedroom, too fat to go on top so he just lays there farting and scratching at his neck which has a serious dose of ringworm and sarcoptic mange-mite.

He has the mouth on him to take on three burly builder's cocks and service them all at the same time. 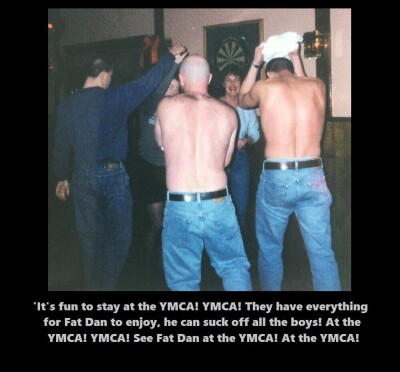 If I were in Dan's shoes (please - no) I'd be inclined to shut Arsefield's down. The thick illiterate cunt can't even spell it properly: it's not Sarsfields, it's Sarsfield's - the possessive, and not a verb. He should change it to 'SARSfield's' what with the no-door gent's toilets and the stink of curry farts wafting out of it.

It's just too sad for words really.

This really makes me laugh though: says Deco - 'Now all the DJs knew the story and sure enough, at the height of festivities, they would blast out 'Mustang Sally'. This achieved 2 goals, it put me under pressure and it got the crowd cheering. It was great fun...'

No, Thicko - it achieved three goals - putting you under pressure, the crowd cheering, and all of yiz dancing around to my Pearl Professional Series all-brass free-floating snare drum, which rocks the Commitments version of Mustang Sally. Deco's a right gobshite, I get paid every time those songs are played in some twee Irish bar anywhere in the world. This is down to the points systems Alan Parker set up for the production crew working on the soundtrack: for every hundred euro/dollars that gets paid into any global music rights agency, shares of that are forwarded to the 'Wrecking Crew' who worked on the production in the studio. Parker was extremely generous and wanted everyone to have a slic of the pie. He didn't rip musicians off - because he's one himself for a start and secondly because he admitted several times over that without us explaining Dublin wit and tradition to him, he wouldn't have been able to make the film as real as it seems.

So anyway, thanks a bunch, Fat Man - you work for me. See? 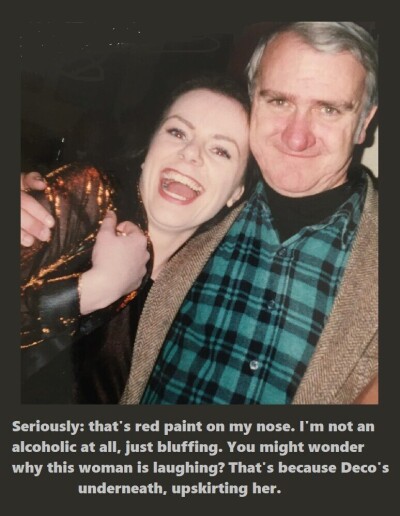 Then there's this guy. Also dead. Why is Deco listing all these dead people who used to get wasted in the bar he was working in? Are their bodies down in the basement hidden behind some bricked-up corner? The man's a lush - the big mad red nose is exactly like Bertie Ahearn's homage to the auld pints of Bass over in Fagan's. At least Fagan's was a real bar, not some tatty 'Irish themed' dive in some hick redneck town over stateside. Deco lauds alcoholics like he lauds himself. Except Deco was the servant, not the customer. He worked behind the bar, gathering the left-overs in the pint glasses into the slop-bucket to serve to these losers when they're too drunk to taste the difference. The they go and puke it all up in the jacks with no doors, giving a really authentic American style aroma about the place: vomit, piss, shit, semen, dirty and discarded female knickers hanging off the ceiling fans and stinking the place out even worse than it already was.

Isn't it odd to see that Deco's 'Person Of The Day' thread is a list of dead people?

This one always reminds me of Youngdan when he thought he was all aces online. In reality, he's just a sad and dickless little twat.

Fat Dan's new penny is from the 'land of the young' - which excludes him entirely what with him being sixty nine and fat. 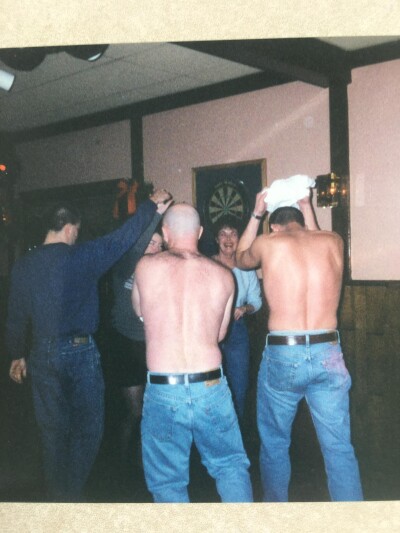 Fat Dan's new penny is from the 'land of the young' - which excludes him entirely what with him being sixty nine and fat.

Dan seriously sounds like a Langer, yet from Galway?

Member
Galway county, but not the town.

I'd say he grew up somewhere outside Kiltimagh going by the thick accent.

I'd say he was booted around as a toddler going by the thick skull. 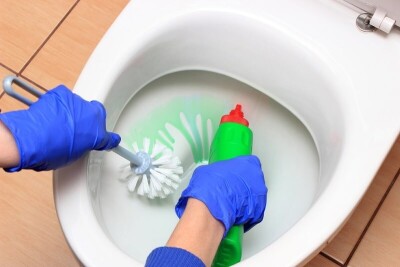 Member
Dan has gone very quiet. Not a word from him.

he is using Ollie (toilet brush) to clean that crapper

Staff member
Administrator
Member
Imagine doing that job if Val ever pays a visit to Boston.

DS86DS said:
Imagine doing that job if Val ever pays a visit to Boston. 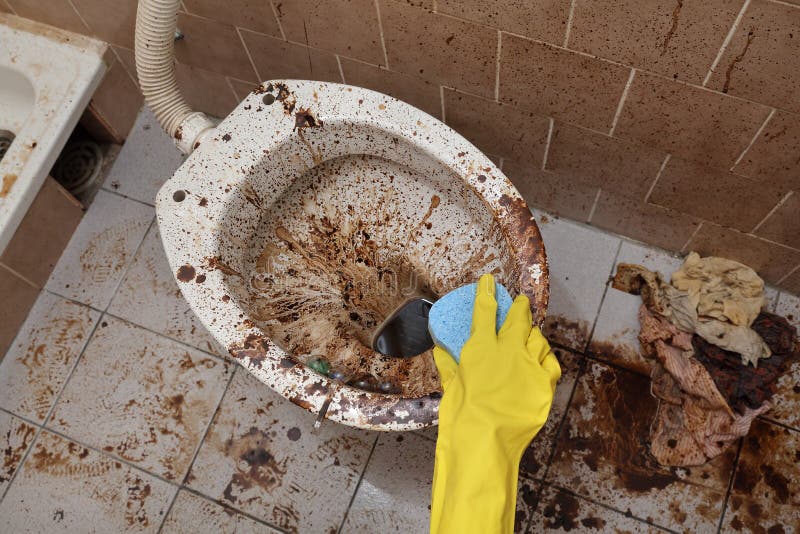 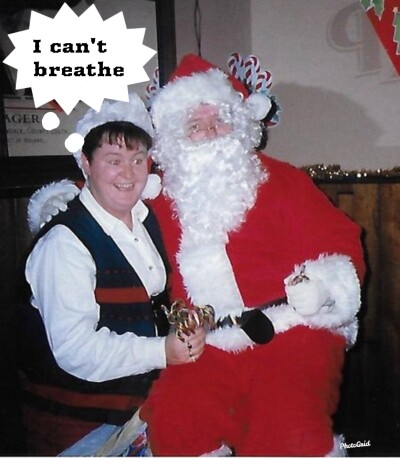