Member
Man, the sheer amount of snow overnight has been incomparable, my windows are almost 50% blocked by the snow on the ledge below. This surpasses even 2002 for heavy weight snowfall, and it's still falling. Mister Plough is under orders not to go up onto the rooftops to clear the weight because it's already too thick for him to know where to link his tie-line. My rear balcony is practically snow-bound: the wooden moose horns are buried under the stuff.

And still I can't traverse the city for new boots: the trams and buses and everything else are still running as normal, but there's no way I'm risking a fall or damaging my spine. I'll forward a few photos of the carnage in a while, right now I'm having coffee and surveying the damage. The apartment is looking darker than usual with the windows blocked and if the winds pick up again while it's falling, then we'll get one of those 'waves' like a surfer rides on.

The snow falls and gathers on the ledges and corners, but the wind blows in from the bay and creates a tunnel in the snow that looks just a like wave in the sea that's frozen into place and I can see through it all the way down to the next block. Haven't seen one of those in several years but I reckon by this evening it'll start to form and then freeze into place. 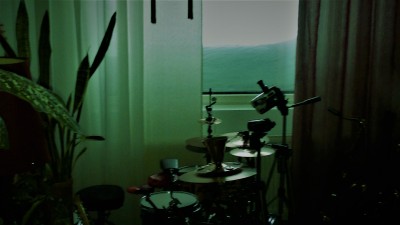 Okay, as you can see, the snow is piled up against my lounge window and is presently taking about 30% of my light. This is a south-facing window, but it's presently over-run with snow and the snow is beginning to form a wave: this means that the lower part of the snow mound will soon be blown away by the incoming eastern winds which will create a tunnel whereby my entire window will be blocked and in the lower section of glass a hole will begin to form in the snow. This hole will stretch the length of the entire rooftop below. I'm on the top floor of a five up/one down block.

The basement houses a day care centre for the kids and they're having a wild time of it, building snowmen and pelting each other with snowballs. I can hear them shrieking and laughing and the sound carries right through the courtyard bringing lots of smiles from the neighbours coming out to clear their balconies. I'm not clearing mine - I want it to pile up as much as possible because I hardly ever use that balcony during winter except for guests who want to smoke cigarettes.

Yesterday was a big fall, but last night was a blizzard, and now my two Jopo bicycles are completely snowed in and are hanging from a large hook on the wall so they don't take up too much space. The brown bread for the birds has frozen solid, so I have to leave out some soft bread for the tits who are having a tough season. 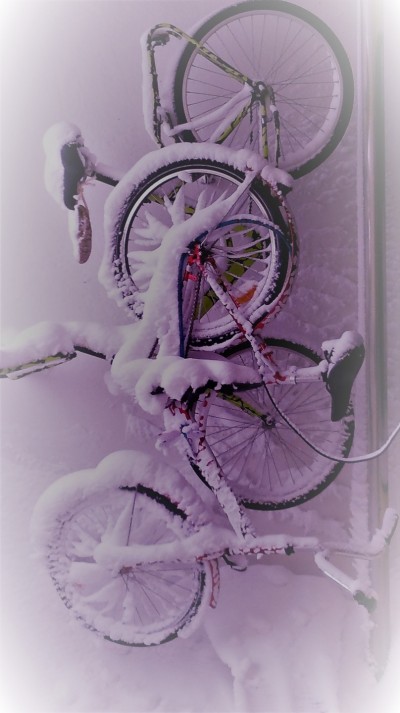 Later in the evening and hopefully before dark I can get a shot of the wave forming, there's little wind at all today but it might kick in later.

Staff member
Moderator
Member
You are officially snowed in mowl .....I suggest a large mug of steaming hot gloggi

Member
It's still falling but now it's a dust, tiny flakes being tossed hither and thither by the breeze, which is light and refreshing. The sun just burst through the clouds and boy does it look stunning out there. The rear balcony is totalled, there's now too much snow to clear, so it can stay like that for the rest of the season.

The light today is really something else, I'm as happy as Val in a slurry tank. 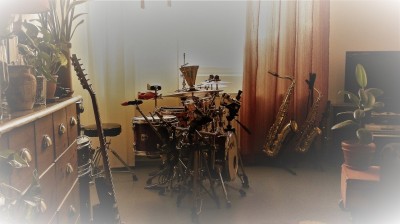 The Jopo's are deep under the snow too, but I have one more in the bathroom with winter tyres on that I can use if I'm in the mood. My only fear is that I might slip or fall and total my titanium neck and spine, so maybe it's better to take the tram out to the hypermarket. 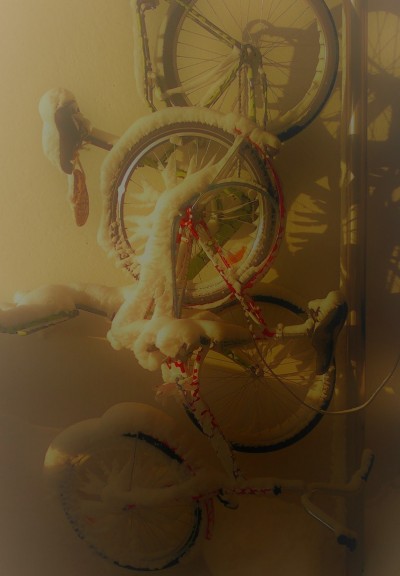 This shot's taken of the courtyard below. As you can see, the snow is piled up on the south facing balcony and ledge beneath to the left. That's for Mister Plough to deal with, it weighs too much for me to take any chances booting it off the rooftop. I poked at it with a stick and it's solid on the inside with fluffy snow on top. One wrong move and I'd likely fall down with it myself. Fuck that. 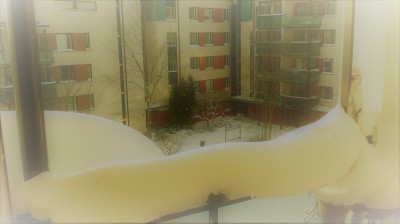 The light indoors is wonderful, even with the snow piled up against the window. There's only a very light breeze today so the tunnel I'm waiting for will have to wait until the winds pick up. Tomorrow is estimated at minus eighteen minimum with a probable drop of maybe even more. Does one use the term more in relation to minus figures? I'd ask Val but he's too much of a moron to give a correct answer. He's spending his time lately sucking up to members on here to fathom whether or not to publish a link to my blog. He can do it, but only at a price. And that price is terminal. 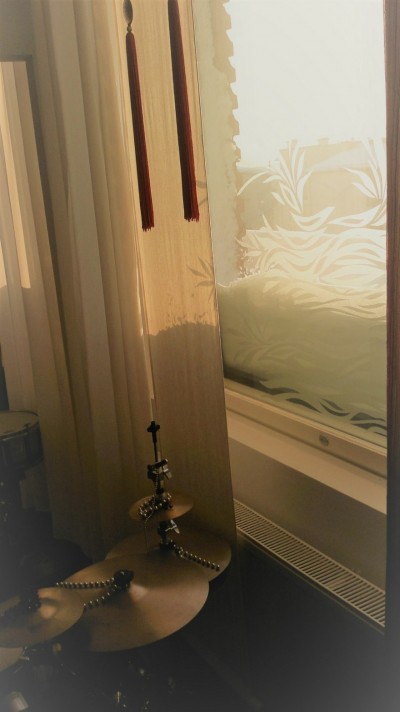 When I'm on the drums, I can't see over the snow pile. I like to look out at the sea when I'm playing or composing. One good thing about the snow piling against the window is that it reduces the reverb in the lounge when I'm playing either the alto or the tenor. The tenor (the larger horn) is called Mathilda, and she's been with me since 1997. The alto's name is Mowlina, a very sweet name my shorty suggested. She's been with me around eight months. She's adorable, has the sweetest tone, and is very light in comparison to the tenor, which weighs in at around fifteen kilos and requires a full neck supported strap to play it for longer periods when standing. The alto is only around eight kilos and I can swing it around behind my back on its strap when my hands are busy rolling a spliff.

I'm presently seeking a lower tone of bass saxophone. Like this one here pictured, only a bit smaller. This one can't be worn, instead it's on a stand and you have to walk up to it and do your thing. It's a sub-contra bass: has the lowest notes on any horn and is usually tuned to concert C to go to a low F at the bottom. The alto is tuned to B-flat, which works very well for Irish music. Or even just playing along with music on TV or online. 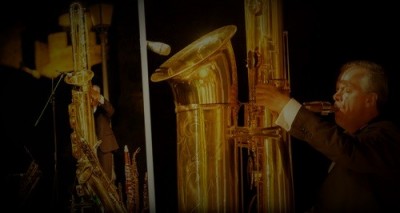 Heh! Last time I heard one used was at the old Andrew's Lane Theatre more than a decade ago when Ireland's premier musical family, the Buckley Dynasty, did one of the last shows they ever got to play with three generations of lads onstage playing all original compositions. Their grandfather played the sub-contra, he literally blew me away too. I tried the horn after the gig and couldn't get a clean note out of her: But damn was she some grand old thing.

I'm wondering what the alto would sound like of I go out onto the frozen over bay and played her there - I'd be heard across several miles if I did. Or the forest beyond would be another interesting experiment. Big boots, big coats, big gloves, but a smaller saxophone like Mowlina.